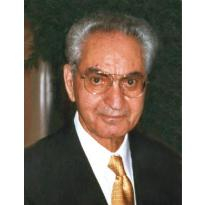 Our beloved father began the last stage of his journey on early hours of Sunday September 19, 2010 while surrounded by his family. The last 36 years of his life he courageously fought against Parkinson disease which eventually consumed him. As we continue to cope with sadness and sorrow, deep down inside we know that he is now in a better place.

He was born on December 30th, 1929 in the small city of Broujerd in Iran and later moved to Tehran to pursue his love for education. He was the youngest son and the youngest of a family of four brothers and one sister. He was known for his wit and unique sense of humor, his fashionable suits and his thirst for knowledge. He loved literature and poetry and was passionate about his backgammon game.

Upon completion of his high school diploma in Broujerd, he attended University of Tehran in 1947. He received a Bachelor of Science degree in Biology soon after. Charged with abundance of energy, nationalistic ideas and love for his country he started his career with the Ministry of Education as a high school educator, a biology teacher.

His interest in politics drew him to a position in the Ministry of States in charge of a small county. He moved to various cities and states with new promotions and finally after 25 years of service retired at age of 50 as Lieutenant Governor. He was dedicated to his career for which he was recognized for his numerous contributions. During his career he also obtained his Masters Degree in Management and completed a yearlong special assignment in London, England.

Early on in his career, he married a beautiful and exceptional lady, Pouran Mozaffarian. Their marriage resulted in the birth of their son Kamyar and their daughter Arezou. About two years ago Mr. and Mrs. Hamid Motamedi celebrated their 50th wedding anniversary among their family and dear friends.

Hamid & Pouran moved to the United States in the early 1990’s to be closer to their children and to have access to better medical care. They became fully engaged in raising their grandchildren until health reasons limited his activities. He was rich being surrounded by his family members and extraordinary life time friends.

We would especially like to extend our deepest and sincere gratitude to our mother for her endless love and devotion during these years in caring for our father. We will never forget the sacrifice and compassion that Pouran so generously offered to him until the last minute of his life. He was truly a lucky man to have such a soul mate for all these years. We are also thankful to his wonderful caregiver Lorena Duarte for providing such excellent care and companionship as well as our hospice team who stayed with us through all the rough times.

Our dearest father will be missed by so many, but mostly by his two children, Kamyar and Arezou, daughter-in-law Fereshteh Tanbakoochi, his son-in-law Ali Ordoubadian, and his two grandchildren, Kasra and Raha Motamedi.

We would like to express our heartfelt and profound appreciation to our extended family across the United States, Europe, Canada and Iran for their endless support in this difficult time.

May he rest in peace to eternity as he was a wonderful husband, father, grandfather, and most of all a good friend.

Funeral Service to be held Saturday, September 25th, 2010 ~ 1:30 pm at El Toro Memorial Park, Lake Forest, CA. Remembrance and reception to follow at 4:00 pm at the Four Seasons Restaurant in Irvine, CA. Please feel free to join us for any or all parts.

Please click on above service links for complete address and driving direction.

In lieu of flowers our family appreciates a donation under his name to the American Parkinson Association below. We thank you in advance.

Or mail your contributions to: