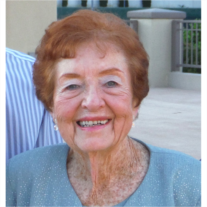 Gwendolyn Ward, 85 passed away peacefully on September 12, 2016 in Laguna Hills,
California. Gwen was born August 8, 1931 in Meridian, Mississippi to Lawrence and
Loraine Brown. She moved to Los Angeles with her family when she was 3 years old.
She graduated from Washington High School in Los Angeles, Class of 1950. She married
Charles Ward in1953 and after raising four children, worked at Marymount College,
volunteered as a docent at Point Vicente, and traveled the world with Charley in
retirement. She lived in San Pedro with Charley 58 years before moving to the
Wellington in Laguna Hills where she resided for the past 2-½ years.

Gwen’s family meant the world to her and she adored her grandchildren. She expressed
her love and joy with enormous generosity and kindness to everyone she met.

A memorial Mass will be celebrated 11:00am Friday September 23 at Holy Trinity
Catholic Church in San Pedro, with burial to follow at Green Hills Memorial Park in
Rancho Palos Verdes. Friends and family are invited to a reception lunch at Ports O’ Call
restaurant following the funeral.