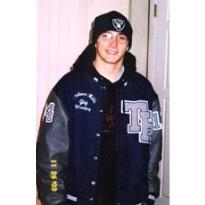 Guy is a Private in the United States Marine Corps. He was a graduate of Trabuco Hills High School class of 2004.

In high school he played basketball, football, and competed in wrestling.
He was a 2-time varsity CIF qualifier for the wrestling team. During high school he also enjoyed being a science docent.

Guy was active in Shepherd of the Hills Methodist Youth group and spent several summers as a volunteer of work groups including Sierra Service Project. Guy loved helping others and had just helped build a playground at Perdido Key State Park in Florida.

Guy coached 3 to 7 year olds for the YMCA in T-ball, basketball and soccer.
He also was a Frosh-Soph coach for Trabuco Hills Wrestling Team.

He is survived by his loving parents, Suzanne and Guy Davis; beloved brother, Brian Davis. Guy also leaves behind many friends and family members. He was dearly loved by many and will be deeply missed by all.

In lieu of flowers, the family requests donations to be made to the Guy L. Davis III Wrestling Scholarship Fund.

Checks should be made out to:
SOTHUMC and memo it for the Guy L. Davis III Wrestling Scholarship Fund.