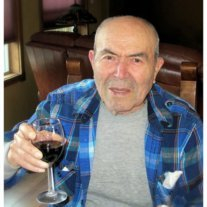 Our dad, Gustavo (Gus) Arroyo was born in El Paso, Texas in 1923, the youngest of six children; 4 brothers and 1 sister. Family was always most important to Gus and he continued that tradition of keeping family foremost in his life when he started a family of his own with his wife Donnie, two sons (Steve & Tom) and two daughters (Diane & Denise). Gus was always involved in all aspects of his family’s lives from homework, to Indian Y-Guides with Tom, building a “space ship” chemistry lab for Steve in the back yard, helping mom in the kitchen always spicing up the food and just being an all around good listener when it came to everyone’s stories around the dinner table.

Gus’ older brothers were all in the Armed Forces (mostly the Navy). His plan was to quit high school and join the Navy with his best friend as a “buddy system”. But instead, Gus got involved in school politics and decided to stay on. He became student body president in his senior year at Garfield High School in East Los Angeles and was voted most popular. Though Gus didn’t quit school, his friend did and joined the Navy, he was assigned to the USS Arizona; and sadly went down with the ship when it was sunk in Pearl Harbor.

Gus graduated high school and joined the Navy at 19 in 1942; he was assigned to a battle supply ship. On the ship’s maiden voyage, Gus came down with the mumps, was removed from the ship and hospitalized for about 5 weeks. Sadly yet ironically, having the mumps,saved his life! About a week after he was taken off the ship, it was hit by a torpedo and many of his shipmates aboard, died. Those men that survived this incident were put on submarine duty. When Gus was finally released from the hospital, he was put on a food supply ship which the guys called the ‘banana boat’ because it was often camouflaged. They would go out to sea and supply the other ships with food.

When Gus returned from the war, he enrolled in Sawyers Business School in Los Angeles for accounting; that is where he met our mom, Donnie. When Gus finished school, he took a year off to travel & plan for his future. When he came back from his travels, he started to date Donnie more seriously. Gus, always the gentleman, eventually asked Donnie’s father for her hand in marriage.

Gus worked for the Los Angeles Superintendent of Schools as a Public Accountant for most of his career and then later on changed jobs and worked for Housing and Urban Development (HUD) in Los Angeles. Gus worked very hard all year long to save up for two important family vacations; one week in San Diego at the Bahia Hotel in Mission Bay and one week camping somewhere in California. Always the joker & fun-loving man, Gus had many friends from work that he stayed in contact with well after his retirement.

We “tent” camped all over California as a family (El Capitan State Beach, Yosemite, Sequoia, and King’s Canyon to name a few). Some of the neighborhood kids went on some of these camping trips with our family and always thought of our dad as their “second father”. He always provided “fun” yet education on these camping trips; he taught us how to blaze a trail, trap & release small animals, and there was always an arts & craft project in the works. At the end of a long day, there was time for sÃ¢‚¬Ëœmores & songs around the campfire.

Our dad & mom loved camping out under the stars, but in their later years when the kids moved out of the house, they invested in a small camper-trailer and enjoyed camping at Lytle Creek in San Bernardino and most often at Huntington State Beach,even hosting a Thanksgiving dinner with barbequed turkey & all the fixings!

Our dad, Gus, was a gentle man we will all miss,a true loving soul. A phrase that has stayed with all of us, one we will ALWAYS REMEMBER & CHERISH is that ,. “There is NO problem without a solution!”,always the eternal optimist!!

May our dearest dad, may you rest in eternal peace, forever in our hearts & memories.

All our love, Steve, Diane, Tom and Denise