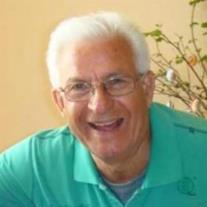 Gunter was born and raised in Germany until his early twenties when he immigrated to Canada in 1957. He met his wife, Heidi in Ottawa and they were married in 1960. Their daughter Judy, was born and they lived in Canada until 1963. With Gunter’s extended family they immigrated to California where their son Richard was born.

He had a distinguished and enjoyable career with Burlington Northern Santa Fe Railroad where he worked as a machinist for 36 years until he retired in 1999. Gunter was a devoted husband, father and friend whose greatest pleasure was spending time with those he loved. He enjoyed watching, coaching, and playing soccer. Gunter had a natural talent for all sports and was an avid gardner, cook and world traveller. He also enjoyed nature and helping all things living. Everyone who knew him, loved him and his dry sense of humor.

Gunter is survived by his wife Heidi and his two children Judy and Richard. His three grandchildren, Chelsea, Cheyne, and Tanner. His brother Hans and sister-in-law Sharon, son-in-law Michael and daughter-in-law Lori. Also his step-grandchildren Ryan, Sarah, and Tiffany.

He is not gone, he will live in our memories and hearts forever.

In lieu of flowers, donations may be made to the Historic Mission Preservation Fund.
www.missionsjc.com/preservation/preservation-foundation.php

Please join the family at a reception at daughter Judy’s home immediately following the Funeral Mass.