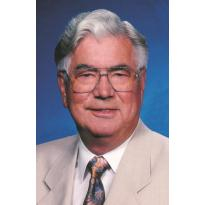 Gunder Moe, a former Crookston, MN resident, passed away August 22nd at his home in Southern California. He was born on November 12, 1921 in Bygland, Minnesota, to Ole and Tone Moe. Gunder grew up in the Bygland, Minnesota area, and graduated from the Northwest School of Agriculture in Crookston, MN and attended the University of Minnesota, St Paul, MN. He served in the Navy during WWII and was honorably discharged as a Quartermaster.

On March 20, 1948, he was united in marriage to Marguerite Stinar in East Grand Forks, MN. For ten years, he was employed by the American Crystal Sugar Company and was transferred during that tenure to Crookston, MN.

In 1963, he was hired by Polk County State Bank, currently known as Bremer Bank as their Agricultural Loan Officer and later promoted to Vice President; He retired after 22 years at the bank.

Gunder enjoyed farming, raising cattle as well as growing wheat and sugar beets. He was blessed with a rich bass singing voice and shared his talent for many local church and social events. As a member of Our Savior’s Lutheran Church in Crookston, he sang in the choir for more than 45 years. He and Marguerite moved to Laguna Woods, CA in 1999.