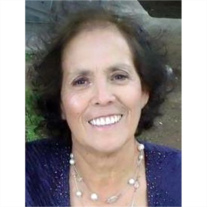 It is with great sadness and heavy hearts that the Gandara family says goodbye to their beloved mother, Guadalupe Jimenez Gandara. After prolonged battle with breast cancer, she was taken peacefully in her home on June 8, 2017 at the age of 66.

Guadalupe was born to Nora Quiroz Montijo and Guillermo (Willie) Hernandez Jimenez November 3, 1950. As a child, she spent many days surrounded by family, especially her six brothers and one sister. In Eloy, AZ she attended Santa Cruz Valley Union High School where she met her future husband Sal. The two were married in an intimate ceremony in 1969.

After working as a Loss Prevention Officer from 1979 to 1999, Guadalupe decided to focus on her family and help raise her grandchildren. She made every effort to support her kids and grandkids in all their activities including sporting events, recitals, and concerts where she could be seen cheering from the sidelines. It was clear to everyone that they were her pride and joy.

Volunteering was also important to Guadalupe. For years she served in the Little League program on the El Toro Marine Base. She coached and managed many teams including several All-Star teams that went on to the Little League Championships. Not only did she coach, she also took on more challenging roles as Little League President and game umpire.

Later in life, Guadalupe became an active member of St. Nicholas Catholic Church where she worked as a teacher’s assistant for the School of Education. She enjoyed the fulfilment of teaching her students about God and their faith. Last July, Guadalupe took a pilgrimage to Rome, Italy where she visited the Vatican and prayed in St. Peter’s Basilica. She savored every minute of this trip as it was a dream come true for her.

For most of her life, Guadalupe was a fierce competitor and loved playing and watching all types of sports. She loved basketball the most and the Los Angeles Lakers were in a class by themselves. Guadalupe thought of the team as her Lakers, and whenever they played, she suited up. On game day you could find Lupe dressed in her Laker shirt and cap ready for a Laker win. Lupe loved to attend games and when they won their championships, she continued to cheer on the team at the victory parades.

Guadalupe is preceded in death by her parents Nora and Willie H. Jimenez; her husband Salvidor I. Gandara; her brother Willie Jimenez Jr.; her sister Estella J. Noriega; her nephew Aurelio “Little Al” Jimenez; and her son-in-law Gabriel MuÃ±oz.