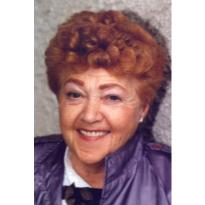 Gracemary Ellen Trissel Ley Grace Mary, 84, of San Juan Capistrano, CA, loving mother and generous soul, passed peacefully into eternal rest on June 26, 2009, at Mission Hospital, Mission Viejo, CA, after a courageous two year battle with peritoneal ovarian cancer. Born in Linthicum Heights, MD, on July 16, 1924, Grace’s family moved to Cleveland in 1928, and later to Canton in 1935, where she attended St. Joseph Grade School, graduated from Mount Marie Academy Central Catholic in 1942, attended Ursuline College in Cleveland, on a chemistry scholarship, and afterward worked at The Timken Company’s laboratories. One of her greatest joys was ballroom dancing to the music of the ‘Big Band Era’. In fact, it was at the infamous Meyer’s Lake Moonlight Ballroom that she met her Navy veteran husband-to-be.

In 1949, Grace Mary married James L. Ley at St. John the Baptist Catholic Church, Canton. Together they busily and happily raised their three sons and their daughter, the four of whom were born in four short years. It was a time of her life about which Grace forever commented, ‘I loved every minute of it!’ But then, she loved all kids-her own, her nieces, her nephews, the neighborhood playmates and the school chums her kids brought home. And the kids loved her. She made the simplest things fun, was creative with limited resources, and would stop in the middle of stirring her pot of chili if any little one needed her attention, whether it was her own child or another. She was every child’s biggest cheerleader. Grace was to kids as fly paper is to flies. She’d gather them ’round her with crafts, woodworking, sewing, knitting, crocheting, pie-baking with cherries they picked from the backyard tree, jelly making with purple grapes they picked from the backyard arbor, fudge making and taffy pulling. She made childhood magical. Swim outings, road trips, camping and family vacations made for an ideal upbringing. It’s safe to say Grace had a head start on mothering, for as a youngster herself, the third of seven and the only girl, she had four little brothers that she ‘mothered’ as though they were her own. She was a ‘natural born mother’, but likely it helped that just as she turned 8, 9, and 10 years of age, each of her last three brothers was born. She helped her mother take care of them then as though they were her baby dolls–the only difference was that they were ‘real live ones’. Besides her skills as a mother, it was Grace’s volunteer work, a number of part time jobs, and many years working as a dental assistant, that prepared her for employment as a Canton City School District teacher at Timken High School in the mid-1970’s, where she taught young women who were aspiring to pursue careers in dentistry. Upon retirement, she and Jim enjoyed more time with their grandchildren. They also flew annually to Southern California to visit their daughter and husband, with whom they resided for ten years once they moved there in 1985. She and Jim enjoyed the warm climate, the beach communities, and their quaint and historic equestrian town of San Juan Capistrano.

Now, 24 years later, Grace Mary has made her final trip to her hometown and will be buried with Jim, her husband of 56 years, who passed away in 2005. She is preceded in death by her parents, LeRoy M. and Grace M. Trissel, and her eldest brother, LeRoy J. Trissel. Grace is survived by her four beloved children and their spouses, James and Tamara Ley of Sarasota, FL; Mary Kathleen Mary Kay and Ted Bowersox of San Juan Capistrano, CA; Thomas and Karon Ley, and John and Barbara Ley, all of Canton; five grandchildren, Sabrina Mike Montague, Jamie Ley, Ted Bowersox, Jr., Natalie Bowersox, and Stacy Jeff Warden, and five great-grandchildren, Tommy and Stefanie Montague; Haley and Katelyn Ley; and Gracie Warden. She is also survived by five brothers, James Trissel, Robert Norma Trissel, John Barbara Trissel, Richard Marlene Trissel, and Gerry Dolores Trissel; three sisters-in-law, Jean A. Rice, Mary Ellen Wood, and Nancy J. Elmer White; forty-eight nieces and nephews, countless great-nieces and nephews, as well as her many friends in Ohio, California, Arizona, England and elsewhere.