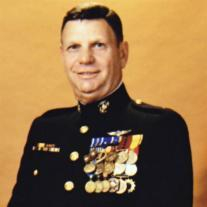 Our father Glenn Alden Bouck, also known as The Pops and most affectionately as GB passed away 15 May 2012 at 6:20 pm.

He is survived by his three sons, Guy, Greg, and Gary also a grand daughter Ariana.

He served in the United States Marine Corp. from 15 March 1943 to 30 September 1976. He saw action in the Pacific theater during WWII and was with Chesty Puller at Chosin Reservoir during the Korean War, also served two tours of duty in Viet Nam.

Our Dad was always ready to help anyone at anytime with anything. His passion was automobiles and the Marine Corp. His laugh and quick wit will be missed by family and friends alike.