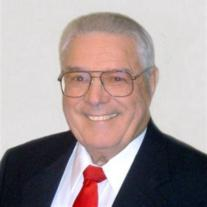 George Dean Atteberry passed peacefully into his Father’s arms on January 9, 2011 at his home in Orange County, California.

Born on April 20, 1929 in Lincoln, Illinois to Albert Leslie and Ruth Watt Atteberry, George grew up on a large grain and livestock farm in the community of Armington, Illinois. He began his education in a one room country school and graduated from Hittle Township High School in 1947. George pursued his desire to learn and his love for the land, attending Illinois State Normal University and then earning a Bachelor of Science degree in agriculture at the University of Illinois in 1951. He followed his college graduation with Veterinary Service in the United States Air Force, serving during the Korean Conflict.

George continued his education with post-graduate courses at the University of Illinois in the Agricultural Economics department. His professional career included positions with Production Credit, Office of Agricultural Stabilization and Conservation, Fruin Farm Management Service and John Hancock Mutual Life Insurance Company. As an Agricultural Investment Officer, George made the first agribusiness loan for this insurance company. Upon his retirement George founded the Arrow Real Estate Company, California Agricultural Advisers and Managers, Inc., and he was active with the Chico Nut Company as well.

With travels that span all fifty states as well as many international countries, George continued to follow his passion for farming and agriculture throughout his life. He was a dedicated Christian and served as an elder, deacon, Sunday school superintendent and youth group sponsor in his church. He had a heart for helping others and was committed to volunteerism in his community including service with the California Butte County Sheriff’s Department, Enloe Medical Center, Elks and the American Legion. In 2006 George published an autobiography of his life titled ‘Born Before Sliced Bread’ so that his experiences on the farm could be shared with future generations.

He was preceded in death by his parents, his brother Tommy Gene Atteberry and his sister, Emmalena King. He will be buried at Mount Joy Cemetery, Eminence Township, Logan County, Illinois. Memorial services will be held at a later date.

In lieu of flowers, please join the family in honoring George’s passion for farming and learning with contributions to the George D. Atteberry Memorial Scholarship fund. Contributions may be sent to: