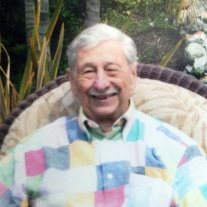 George, 84, of Laguna Niguel was born in Sheridan Wyoming where his father had him become a blood brother of the Cheyenne Indian Tribe. While living in Denver his father entered him at Culver Military Academy. This was the start of his love of the military and this country. He was very patriotic. One of his favorite sayings was “Dam the torpedoes, full speed ahead”. The family then moved to Arizona where he attended and graduated from Arizona State University with a BS degree. After college he went to work in the pharmaceutical industry and became National Sales Manager with a large pharmaceutical Company. He was also fortunate to work with a leading group of doctors in LA where he developed one of the first HMO’s. Later in life he discovered he loved to paint and became an accomplished artist without one day of art lessons.

He is survived by his wife of 39 years, Beverly Ham; 3 children, Kevin, Michael, and Susan; 3 granddaughters, Kinsley, Kristina, and Jenny; and 4 stepsons, Tim, Greg, Phil and JR.

We will all miss George’s quick wit and sense of humor and love of life, which made a long lasting impression on all who knew him.