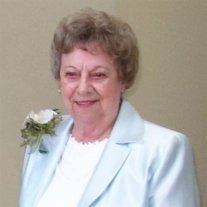 Freida, daughter of Eva and Jacob Wegelin, was born in Gering, Nebraska on April 11, 1922. She was the seventh of nine children raised on a farm in the tight knit rural German-Russian community. They were a happy family and Freida loved to work outdoors with her older brothers. She attended some high school before she was needed to help the family full-time after the death of her father.

Freida moved to California for a brief time during WW II to work as a riveter in the airplane industry. After Harold Heimbuck returned from service, he and Freida courted and were married on February 17, 1947. Son Randy and daughter Sandy were born to them while living in Scottsbluff, NE. In 1951 they joined other family members in California and bought a home in Torrance where they lived for almost 30 years. Freida enjoyed ‘homemaking’, in the best sense of the word. She was creative, full of energy, a faithful volunteer, active in church life, devoted to her husband and children, and a wonderful friend and neighbor.

Upon Harold’s retirement in 1980, he and Freida relocated to a new home in Hemet, CA. There Freida again enjoyed her home and family, and she loved the added role of Doting Grandmother to her grandchildren and Great Aunt to the many nephews and nieces. Overnight guests were always warmly welcomed. In 2002 they moved to Mission Viejo. When Harold died in 2010 after 63 years of marriage, Freida greatly missed her soul-mate, but continued to be active in her Vintage Community.

Freida considered herself lucky. She was lucky in pinochle and in poker, in love and in life. We would call her blessed. She is preceded in death by her loving husband Harold, her parents and brothers Jacob, Henry, Fred, George, Eddie, Herman and sisters Mollie Schott and Ruth Engleman. She is survived by Randy Heimbuck and Roxanne, Sandy (Heimbuck) Zerby and Glen; grandchildren Matthew Zerby, Sara Beggs and Jeff, Laura Drehs and Matthew, Amy Doyle and Joshua, and Joel Heimbuck; five beautiful great granddaughters, Clara and Hannah Drehs, Layla and Abigail Doyle, and Charlotte Beggs; and many nephews and nieces.