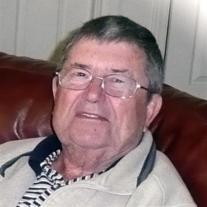 Fred survived bombing raids in his teens in England and was drafted into the British Army on his 18th birthday. He served in the Far East, Africa, and India. After the Army he started working for an engineering company and went to school in the evenings in England and again later when he moved to the states. Fred enjoyed tennis and rugby. During this time, he met and married his wife, Barbara, in 1954 in England. Approximately one year later they moved to Canada and one year after Canada settled in Southern California. Fred worked for an engineering company and traveled the world on jobs with this company for almost 30 years.

Fred and Barbara were married for 40 years until her passing at a young age in 1994. They had two daughters, Carolyn and Kristine, and seven grandchildren: Stefanie, Michael, Matthew, David, Gregory, Jennifer, and Nathan.

Fred retired in 1993 and kept busy playing golf, and lawn bowling. For years he had also been very active in skiing and bridge groups. He restored antique clocks and volunteered at South Coast Medical Center in Laguna Beach (now Mission Hospital LB) for many years.

Fred is survived by his children and grandchildren. Burial was private and he was laid to rest in El Toro Memorial Park with his wife Barbara.

In lieu of flowers, please make a donation to CHOC (Children’s Hospital of Orange County) online at www.choc.org or by calling (714) 532-8690. CHOC was very near and dear to Fred and Barbara’s hearts for years.

Our loved ones never truly leave us ,
They live on in kindness they showed, ,
The comfort they shared, ,.
And the love they brought into our lives.

A life well-lived ,
Is a precious gift of hope and strength and grace
From someone who has made our world a brighter, better place.
It’s filled with moments sweet and sad, with smiles and sometimes tears,
With friendships formed and good times shared and laughter through the years.
A life well-lived is a legacy of joy and pride and pleasure,
A loving, lasting memory our grateful hearts will treasure.

We will miss you very much dad, but rejoice that you are with the Lord!

6 responses to Frederick A. Baker