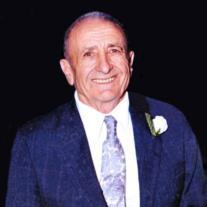 Frank Petrozzi was born in Vensseux, France on October 3, 1921. He was the youngest of 9 children – 3 boys and 6 girls. When Frank was 6 weeks old his father took the family back to war torn Sora, Italy. His sisters, Louise and Marquerite went back to France. They later married and established families in France. A couple of Frank’s other siblings, John and Domenick, emigrated to the US.

Frank worked on the family farm from the time he was a young child until he left Italy. During World War II he was a cook in the Italian army. Frank met Mary Tersigni, the love of his life, in 1945. They had a courtship in which the saw each other only a couple of times a month. They were married three years later on January 18, 1948. His first daughter Anna was born on October 5, 1948.

Wanting a better life for his wife and daughter Anna, Frank came to US in 1951. He didn’t know a word of English when he came to America. Approximately 9 months later, Mary and Anna joined him. When the family arrived in the US they lived in Schenectady, New York. Here Frank and Mary’s second daughter, Rosemary, was born on February 19, 1956 and their son Phil was born on August 15, 1958.

Willing to work hard Frank started in the construction trade as a ‘ditch digger.’ He worked his way up the ladder and eventually became a partner in the Impala Construction Company. The construction company renovated and built homes, schools, and stores.

Frank and his family moved to Detroit, Michigan so he could work at Ford Motor Co. He worked the swing shift at Ford and construction during the day.

Following Phil’s graduation from high school, Frank, Mary, and Phil moved to California to be near Anna and Rosemary. At the age of 55 Frank opened the business Windmill Liquor and Deli with his wife Mary, daughter Anna, and son-in-law Mike. When the family business was sold, about 3 years later, he went to work at Alpha Beta.

His heart saddened with the loss of his daughter Rosemary on November 25, 2006. He took care of his wife Mary when she became ill with Parkinson’s disease and dementia. No one took care of his wife better than he did. Mary died on February 16, 2010. Frank was diagnosed with Alzheimer’s disease in 2010, after his wife’s death. Frank died on August 5, 2012. He was always willing to help his children, grandchildren, and friends. No task was too small, tedious, tiring, or boring. He will be missed by all those who knew and loved him dearly.