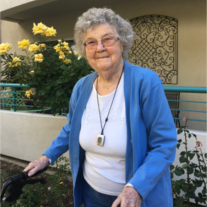 Frances was born in Olathe, Kansas on April 4, 1924. Her parents were Clyde and Edith Ewing, nee McClellan She was pre-deceased by her three siblings: Mildred Barnett of Alhambra, California, Glenn Ewing of Olathe, Kansas, and Tom Ewing of Spring Hill, Kansas.

In 1943, Frances married Larry Ellis Waldron, who predeceased her in 1976. Frances and Larry are survived by their five children: Gary Waldron and his wife Carol (Sunny) Foster of Laguna Beach, California; April Waldron of Laguna Niguel, California; Kathie W. Clark and her husband Michael of Atlanta, Georgia; Craig Waldron of Tulsa, Oklahoma, and Cheryl Waldron of San Antonio, Texas.

Frances was a very happy, kind, and loving woman. She had a smile for everyone and a very contagious laugh. She loved to help others and did so throughout her life as a room parent for all of her children, a den mother for her son Gary’s Boy Scout troop, and as a Girl Scout leader for her daughters. She was a very active member of the Presbyterian Church. Later in life, she enjoyed working with young adults with special needs and volunteered on a weekly basis.
Through Larry’s position with Continental Oil Company, she supported his moves of the family from Kansas to Oklahoma, Texas, New Jersey, Perth in Western Australia, Sydney in New South Wales, Australia, and London, England. After Larry was diagnosed with cancer, the family returned to Ponca City, Oklahoma in 1975 where Frances cared for Larry through his final days.

After Larry’s death, Frances worked briefly for a stockbroker, but her real love was travelling and meeting new people, so Frances went to work as a travel agent. She had many repeat customers because of her travel experience and very personalized service. Frances traveled the world many times and enjoyed every minute of it.

Despite her many travels, Frances never forgot her Kansas roots and was a lifelong staunch supporter of University of Kansas basketball – go Jayhawks!

During her many years in Ponca City Oklahoma, Frances spent much quality time with three of her grandchildren, Sam, Larry and Amanda Waldron, and was an avid gardener. She moved to Laguna Beach, California in 2004 to be close to her two oldest children, where she enjoyed many years of fine dining and great weather.