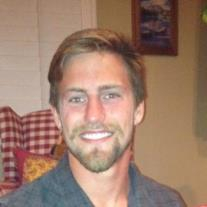 Forrest Kingsbury Werner IV was born June 24, 1992, and died on March 10, 2015. Born and raised in San Juan Capistrano, Forrest heard the call of the nearby ocean at an early age. His love of the water became a theme in his life. Whether he was boating, surfing or competing in high school water polo or swimming, he was at peace around the water. When it came time to think of college and a major, he headed to Sonoma State University to earn a degree in Environmental Studies with an Emphasis in Water Quality.

He was a dedicated reader and particularly enjoyed fantasy fiction. One of the highlights of his past summer was attending Comic-Con in San Diego.

A consummate athlete, Forrest earned a Second Degree Black Belt in Karate, and has always been dedicated to physical fitness. He was strong and often quiet, a deep thinker, a hard worker and talented in more ways than he would ever admit.

Forrest is survived by his father Forrest Werner III, mother Tracy Vranicar Werner, sisters Whitney and Haley, and brother Hayden. He is also survived by his grandparents, Forrest Jr. and Jane Werner, and Pat and Frank Vranicar, as well as many aunts, uncles and cousins – all of whom love him dearly.

A paddle out in Forrest’s honor will take place Sunday, March 15 at 5:30 p.m. at Strands Beach in Dana Point. Meet at the north end of the beach.

Donations in honor of Forrest may be made to the National Alliance on Mental Illness, Orange County (NAMI) at http://www.namioc.org/memorials (Forrest’s memorial page will be set up soon) or to a scholarship fund that has been established for the Orange County Junior Lifeguard program.