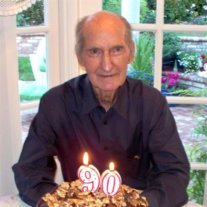 Emmet Elwin Parker, 90, of Mission Viejo, California, beloved father, husband, grandfather, great-grandfather, and brother, died on October 5, 2013 in Laguna Hills, California, surrounded by his loving family. Emmet died of complications of a stroke suffered one week earlier. He was born on April 10, 1923 in Stevens, South Dakota to Lillie May and Charles Leroy Parker.

Emmet grew up in Sioux City, Iowa, and graduated from Sioux City Central High School. After graduation, Emmet made his way to California, where he found work and attended San Francisco City College until enlisting in the U.S. Merchant Marine just before the outbreak of World War II. Emmet served with distinction in both the Atlantic and Pacific combat theaters through the end of the war, rising to the rank of Second Mate and earning the Merchant Marine Combat Bar Ribbon as well as many other decorations. After the war, Emmet began his career with Southern California Edison, from which he retired as a Chemist after almost 30 years of service. Emmet married Darlene Kochen of Sioux City, Iowa in 1943, and they had recently celebrated 70 years of marriage.

Emmet was an avid reader, golfer, jogger, military historian, youth Bible teacher, newspaper editorialist, conversationalist, storyteller, and family patriarch. Perhaps his greatest passion was the practice of his faith, the study of scripture, volunteering his time at Grace Community Church, where he was a member for almost 22 years, and serving as a youth instructor for BSF (Bible Study Fellowship) International. He had a unique ability to connect with and relate to all generations, and he could frequently be found with index finger in air at his kitchen table, barber shop or Darlene’s beauty salon as he made a political point, delivered a punch line, told a war story, or quizzed his listener on any subject from Einstein’s theory of general relativity to the USC Trojan football team. He could quote Shakespeare or provide a tour of any Civil War battlefield, and his personality, smile, wit and sense of humor, and profound intelligence brightened the world of all those who shared his life.

In honor of Emmet, there will be a visitation Friday, October 11, 2013 from 7-9 PM at the O’Connor Mortuary, 25301 Alicia Pkwy, Laguna Hills, CA 92653. A graveside service will be conducted at 9 AM, Saturday, October 12 at El Toro Memorial Park, 25751 Trabuco Road, Lake Forest, CA 92630, followed by a memorial service at 10:30 AM Saturday, October 12 at Grace Community Church, 26052 Trabuco Road, Lake Forest, CA. A reception at the Church will immediately follow the memorial service.

Flowers may be sent to the O’Connor Mortuary, 25301 Alicia Parkway, Laguna Hills, CA 92653. Donations may also be made to the Grace Community Church, 26052 Trabuco Road, Lake Forest, CA 92630, designated specifically for the “Emmet Elwin Parker Fund,” which will benefit Grace Community Church programs.