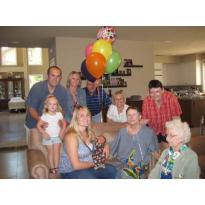 Eloise Bower passed away peacefully on August 26, 2010 surrounded by her family. She was born in Santa Barbara, California on July 30, 1941 to Charles and Lorna Bower. Eloise served as an Elementary School teacher in the Los Angeles Unified School District for almost two decades, before moving to Orange County. She then worked for over 25 years as an integral part of local CPA firm Conrad and Associates, LLP, which later became part of the national firm Mayer Hoffman McCann, LLP during her employ. In addition, she served as an assistant to James Roosevelt, son of former United States President Franklin Delano Roosevelt at the Chapman Enterprise Institute. Although a resident of Irvine for close to 30 years, Eloise’s love of travel took her not only around the country, but around the globe, enjoying numerous trips throughout the United States, Europe and Asia. Eloise was known as a generous and fun loving soul, a devoted daughter, a caring sister, a loving and dedicated aunt, and a loyal friend. She enriched the lives of all those close to her.

She is survived by her mother, Lorna Wright; her sister, Barbara Conrad and brother-in-law, Ron Conrad; her niece and nephews, Chris Conrad, Amy Briggs Mike, Ryan Conrad and Matthew Conrad Alison; and 6 great-nieces and -nephews. She was preceded in death by her father, Charles Bower.

Visitation will be from 4:00-6:00 p.m. Sunday, August 29 at O’Connor Mortuary, Laguna Hills. Funeral services will be held at Irvine Presbyterian Church on Monday, August 30, 2010 at 11 am. Reception to follow at the church, followed by a private interment.