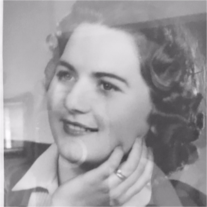 Elizabeth “Elly” Molnar passed away peacefully at home on May 10, 2017 and now rests in the hands of the Lord. She was born on April 15, 1923 in Apatin, Hungary, the daughter of Joseph and Elizabeth Szendroy.

Elly enjoyed swimming and tennis during her childhood and throughout her life. She was educated in local schools, and attended boarding school in Budapest from 1937-39. It was there that she began her love of languages, as her instruction was given in Hungarian, German, English, and French. By the end of her life she spoke seven languages.

The onset of World War II brought many changes to her life, including meeting a handsome Hungarian Army officer who became the love of her life. Elly married Gustav Molnar on August 5, 1944. Soon after they had to flee Hungary and after being separated in different prison camps, were reunited and then lived in Linz, Austria till 1949 in a refugee camp.

In June 1949, Elly, Gustav, and their two children immigrated to the United States where they built a happy and successful life together. Gustav pursued a career in landscape architecture, while Elly worked various jobs within the sewing industry, culminating with managing an industrial sewing company that provided products to many businesses, including NASA. After Gustav’s death in 1981, she relocated to Mission Viejo.

Upon retirement, Elly took up traveling, and spent many years traversing all parts of the world. A giant map adorned the wall in her home with pins marking each of the places she had visited. Her final trip was at age 88, when she traveled solo to Hungary to visit family.

The family would like to thank those who cared for her during the last years of her life, especially Aniko Szentivanyi.

In lieu of flowers, donations to the Susan G Komen Foundation are welcome. Elly was a survivor of breast cancer at 85. The O’Connor Mortuary, 25301 Alicia Parkway, Laguna Hills, CA 92653 is handling the arrangements where you may leave online condolences as well.