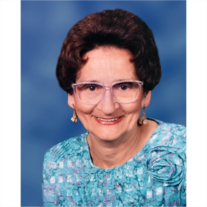 Elena Perez passed away peacefully in her sleep on the early hours of January 4th, 2017. She is survived by her daughter, Angela; 3 grandchildren, Cindy, Alex and Christy; and 6 great-granchildren.

Elena was born in Cuba on August 18th, 1918 to Domingo and Josefa Rodriguez. She married Raimundo Perez on April 30th, 1950 and welcomed two children, Angela and Ernesto. Unfortunately, their son passed away at the age of two.

Elena moved to the United States in 1966 and settled in Torrance, California, moving to Mission Viejo in 1978.

Elena was an amazing woman. She spent most of her life caring for others. She would often go out of her way to reach those who were in need. She was a courageous woman and in her last days she continued to show courage and strength.

Elena will be missed but we know she is at peace and happy in Heaven with her parents, husband, son, and friends who predeceased her.