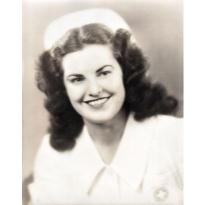 Eleanor Augustine Samson Leatherby, known by many as AMMA, went home to be with the Lord on April 11, 2011. She was born to Leo and Freda Samson April 25, 1927 in the Icelandic community of Akra, North Dakota, the ninth of twelve children, all born on the family farm.

Eleanor was very proud of her Icelandic and North Dakota heritage and often told stories of growing up on the farm with her large family. Coming of age during the Depression and World War Two, she never forgot her roots, tough times and her beloved family.

After graduating from high school in 1945, she pursued a career in nursing which brought her eventually to Los Angeles in 1949. She fondly looked back at the 1950s with memories of Southern California and her life as a young working woman. She worked at Queen of Angels Hospital and later as an RN with the telephone company.

In 1958 she met her husband Ralph Leatherby, a young widower with two children. They were married in 1959 and Eleanor enthusiastically took on the role of mother to Rusty and Joann. They moved to Fullerton in 1960 where they raised their family and built their life together. In 1975, with the kids having left the nest, they moved to Big Canyon Country Club in Newport Beach. Their favorite activities were golf, piano bar singing and dinner with friends and family. Eleanor was quite proud to know she was a better golfer than her husband, who she introduced to the game.

In the 1990s Ralph and Eleanor retired to Rancho Mirage where they spent their final years together before Ralph passed away in 2000.

Eleanor was a great fan of Angels baseball, from their early years at Chavez Ravine to their many years in Anaheim.

Eleanor was a natural caregiver. Throughout her life she cared for others including her mother, her aunts and her husband who suffered with Parkinson’s Disease and Cancer. She encouraged her children to be givers and contributors. Eleanor and Ralph were generous donors to numerous organizations, individuals and charities. Their philanthropy was significant and demonstrated the generosity and compassion that they felt for others.

Eleanor became Amma with the birth of her grandchildren Katie and Doug. Nothing gave her greater joy than to gather them close and share stories of growing up on the farm.

One of her proudest projects was the creation of Casa de AMMA, a residential apartment/program serving adults with special needs in San Juan Capistrano. It was her love and compassion that was the inspiration for the good work that is done at her namesake ?Casa.?

Amma leaves behind a legacy of generosity and service. She is survived by daughter Joann Leatherby and son-in-law Dr. Gregory Bates; son Russell Leatherby and daughter-in-law Susie; grandson Doug; granddaughter Katie Gillin and her husband Peter; and great-granddaughters Annie and Susie; sister Francis Diblin; her caregiver Louis Cozeault as well as other family and friends too numerous to list.

Amma’s humor, big heart and example will be missed by all but never forgotten.

May she rest in the arms of Our Lord forever.

A memorial service will be held at 10am Saturday April 16 at the Chapel at Crossline Community Church, 23331 Moulton Parkway, Laguna Hills, CA 92653.

In lieu of flowers the family requests donations be made to Casa de Amma, 27231 Calle Arroyo, San Juan Capistrano, CA 92675.