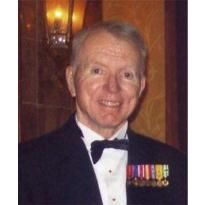 Graduating from Bowdoin College, Maine in 1960, Miles was a second Lt. in the U.S. Marine Corps. He saw duty in many places, including Guantanamo Bay, Cuba and Vietnam. He won a Bronze Star with combat V and a Purple Heart.

Miles retired from the Marine Corps in 1980 and began his career at Hughes Aircraft Co. now Raytheon. He was sent to Siberia USSR several times as an inspector for our nuclear treaty team. After winning a battle with prostate cancer, he retired from Raytheon and indulged his love of airplanes in his son’s Cessna. Miles enjoyed music he had a great voice, hiking and mountain climbing U.S., Mexico, Argentina.

He met his wife, Suzanne Sabatelli Keefe, in Okinawa in 1961 and they were married for forty-six years.

He is predeceased by his daughter, Pierce Ann and his brother, Christopher.

Funeral Mass will be Friday, July 31 at 10:00 a.m. at St. Elizabeth Ann Seton Catholic Church in Irvine. Burial will be in Arlington National Cemetery at a later date. In lieu of flowers donations may be made to the Navy-Marine Corps Relief Society, www.nmcrs.org, 875 N. Randolph St., Suite 225, Arlington, VA 22203.

Miles was a wonderful man and left a legacy of love and loyalty to his family. We miss him terribly.