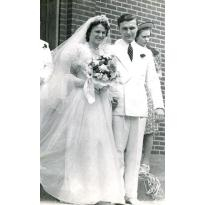 Dorothy Zulma Schelstrate Walsh
Passed away Tuesday, September 6, 2011 at the age of 91 in San Diego, California.

Dorothy was born in Kansas City, MO on March 13, 1920. She graduated from St. Agnes Academy in 1937. In 1940 Dorothy married Donald Walsh, the handsome young man who delivered groceries to her house from Walsh’s Market. They set off on a lifetime of adventures eventually moving to California in 1950, and settling in Arcadia to raise their growing family. They lived the last 30 years in Orange County, and moved to San Diego one year ago in order to be in senior care.

Dorothy loved to travel and her favorite line was: ‘My bags are always packed.’ Dorothy and Don were proud of the fact that they had been in all 50 states. Don was the driver and Dorothy the navigator as they would take their car trips. Dorothy would read out loud about what they were seeing, and would instruct Don to turn off on a side road somewhere because, as she would say, ‘When are we ever going to be here again?’. She never wanted to miss out on anything!

Dorothy was avid reader and loved to cook exotic foods for her family. She even could cook breakfast on an open grill in the San Gabriel Mountains, while Don took the kids off on a hike. Dorothy loved to have a good time and she and Don were fortunate to have an amazing group of friends in Arcadia who shared the good times with them. Their Halloween and Fourth of July parties were legendary. Dorothy gave her children the best birthday parties ever; she made homemade Halloween costumes and was always ready for any creative event.

Dorothy was greatly loved by her 10 grandchildren: Claire Poertner, Anne Klein, Megan Walsh, Ryan Walsh, Derrick Walsh, Taylor Walsh, Justin Petit, Shawn Petit, Sarah Tompkins, and William Tompkins.
Dorothy was also fortunate to have had 7 great-grandchildren: Jackson, Logan and Brinley Klein, Kaylee and Logan Walsh, Jacob Petit and Alexis Petit. Dorothy will be remembered as the strong matriarch of the family. She was a devoted wife, mother, grandmother and friend.

The family requests that, in lieu of flowers, donations may be made to Dorothy’s favorite charities:
CHOC – Children’s Hospital of Orange County choc.org
St. Joseph’s Indian School, Chamberlain, SD stjo.org