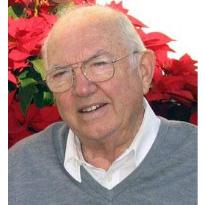 He graduated from high school in West Bend, Iowa and from the University of Minnesota in l950. He entered the military service with the U.S. Army during the Korean War and served from 1950 to 1952, most of the time in Germany.

Following military service, he moved to California where he worked at Stanford University. In Palo Alto, working with a youth program at Pastor Ray Farness’ congregation, that he received the call to the ministry and enrolled in Lutheran Seminary in St. Paul, Minnesota.

He served churches in Eureka and Orange California, Albuquerque New Mexico, Sacramento and San Carlos before his retirement in 1990. He and Margaret moved to Dana Point and joined Mission Lutheran Church where he has served as a pastor.

His passions were singing in the choir, the Stephen Ministry, and leading Bible studies. He was an avid fan of the California Angels and University of Minnesota Gophers. He was a member of the Niguel Shores Men’s Club.

He was predeceased by his son Paul, and survived by his wife, Margaret Fisher, their three daughters, Bobbi, Kristin Bill, and Linda John, and eight grandchildren.