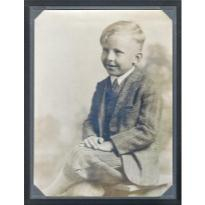 Donald Earl Dunn passed away at 3:48 PM May 25th, 2011 in Irvine, California. He was 87 years old and had entered the hospital on May 5th, with chest pains. For three weeks he endured hospital food, nurses with cold hands, and fought the boredom of daytime television, not to mention never hearing a decent politically incorrect joke the entire time. Not even a decorated Veteran of World War II, and a survivor of the Great Depression could take another day of HMO healthcare.

Donald was born in Kokomo, Indiana to Indiana natives, Ural and Louise Dunn, before moving to the Los Angeles area as a young boy. He was a genuine Boy Scout, raised with younger brothers Dale & Jerry, and supporting himself with a paper route. He attended Fremont High School in Los Angeles, and was actually enrolled in community college when Pearl Harbor was bombed, and then rushed to join the Navy.

He chose submarines, and was a corpsmen assigned to the Pacific Theatre. He served on the USS Bluegill and USS Sea Fox. He was at Quadalcanal, Tulogii, the Solomons. He was stationed in San Diego, Honolulu, and Long Beach. He ultimately retired out of San Diego after over 22 years of Naval service as the Senior Chief Petty Officer.

He moved his family, wife Judy an Army Nurse, sons Tom, Mark, and daughter Diana, back to the Long Beach area, and began working with the State Health Department licensing hospitals. He ultimately worked in their Sacramento and Santa Ana offices, before retiring out of their Berkeley office to Walnut Creek, California with his wife Judy, to enjoy the ‘Good Life’ that they had planned for.

After Judy’s passing, Donald moved back to Orange County, to be near his children and grandchildren. He settled in the Las Flores area. Donald attended Community Lutheran Church, as well as all of his grandchildren’s sporting events, then even had Megan and Sarah Hersh, his grand-daughters live with him at different times, helping them attend college.

My father was a man of true character, honest, hard working, loyal, thrifty yet generous, and he loved this country. He was a proud American. He loved his family. He missed his wife Judy to his last day. He loved California, the ocean, the warmth, the sunshine. He found happiness in all the simple, but important things and times in life. He was absolutely part of ‘The Greatest Generation’!! He will be missed by all that knew him.