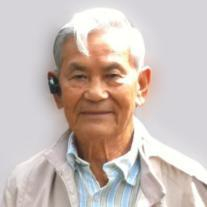 Don Lee, loving husband, father, grandfather, great-grandfather and Veteran, passed away suddenly in Mission Viejo, CA, on March 13th at the age of 82.

He was born in China and came to the United States when he was eight years old. He worked in his father’s laundry in New York until he joined the United States Air Force at age 15. In the Air Force, he became an IT systems trainer and he went on to become a computer systems pioneer.

An interesting part of his history is that his grandfather came from China to work on the railroads in San Francisco, and his father was born shortly thereafter in Oregon. There are no records of his family history, but it is thought that his father’s mother may have been an American Indian. His journey from China to great success in the United States embodies the American dream.

Despite not graduating from high school, he attended Stanford and earned a B.S. and M.S. in Engineering from the University of Southern California. He went on to earn an MBA from Rider’s College in New Jersey and was an engineering manager at leading technology companies, where he specialized in computer chips and earned 11 patents for his work.

After retiring from technology, he decided to continue his education and received a Master’s degree and teaching credential at 73 years of age from Claremont Graduate University in Pomona. He became a chemistry and math teacher at a Los Angeles County high school and retired from full-time teaching at 80 years old, but still worked as a substitute teacher.

Don valued higher education and strongly urged each of his children not only to obtain their college degrees, but to reach well beyond higher education to achieve their dreams. Dawna is an actress and the VP of a software company. She has an A.S. in Chemistry from Cypress College, a B.S. in Business Management, and an MBA from Pepperdine University. Kathy, Laurie, and Allen earned their bachelor’s degrees at UCLA. Kathy graduated from Harvard Law School and Laurie earned her M.S. degree as a nurse practitioner at Cal State Dominguez Hills. Rick received a B.A. in Film from USC. Allen is a tax accountant in Irvine, CA.

Eric received a B.S. and M.S. in Engineering from USC. David received a B.A. (UC Irvine) and an M.A. (Cal State Long Beach) in History. His nephew David Wong and composer/conductor George Daugherty both won an Emmy for “Peter and the Wolf” and organized the string trio at Mr. Lee’s memorial service.