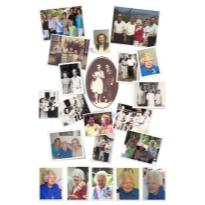 Dolores Marie Stahl Dolores Alvey was born in Indianapolis, Indiana on May 26, 1918, the first child born to Frank and Stella Stahl.

She attended Saint Patrick’s Elementary School and earned a scholarship to attend Saint Agnes Academy, from which she graduated with honors and was designated her class valedictorian in 1936.

Following graduation, Dody, as her friends call her, worked as the executive secretary to the Superintendent of Indianapolis Power and Light Company.

She met Mose Alvey while still a student at Saint Patrick’s and they began dating when they were sophomores in High School. Dody and Mose became engaged at 19 years of age, and married on the very first Saturday that followed their 21st birthdays, which was June 3, 1939. They celebrated their 72nd wedding anniversary in 2011.

David, their first born son, arrived in January of 1943. They relocated their little family to Macon, Georgia after Mose was drafted into the US Army Air Corps during WWII. They resided there until Mose was assigned to duty in England, and was required to leave his family and expecting wife behind.

Dody and David moved back to Indianapolis and shared housing with her father. She gave birth to twins, Jeanne and Jim in March of 1945 while Mose was still stationed in England. He did not return until the end of the war, and did not see his new children until they were 9 months old.

In 1951, the family relocated to Altadena, California, to enjoy a climate free from snow and high humidity.
Dody became a stay at home mother until 1955 when she went to work for the Pasadena Unified School District as the secretary to the Assistant Principal at Pasadena High School. She held that position for 10 years and retired when Mose’s company relocated to Orange County.

Her volunteer service commitment carried over from Saint Edwards Chapel to Saint Edward’s Church when the new building was completed in Dana Point. That first building is now called Knight Hall.

Mose and Dody provided volunteer assistance when the ‘multipurpose building’ was Saint Edward’s only church and hall. Their commitment was continuous, from those beginning days and followed into the beautiful new building that we proudly call Saint Edward the Confessor Church.

She retired from the Altar Guild after completing 25 years of service, the last 15 of which she served its head. Dody continued a rich prayer life at home, attending daily televised Mass and saying a litany of prayers and rosaries daily. Her worn prayer books, novena books, and collection of rosaries are treasured remembrances; and a testament to the hours she dedicated to answering prayer requests, and personal devotion.

Dody never worked for praise or for recognition. She worked and prayed as an expression of her love of God, her Family and Friends. She was always quietly in the background bringing us peace, administering to our needs, and sharing her gentle wisdom.

It is fitting that her services will be held at Saint Edward the Confessor Church at 11:00 am, Monday, September 12th; this is the Feast Day of The Most Holy Name of the Blessed Virgin Mary.

Dad Mose always said, ‘Listen to Mother and no one will get hurt.’ He was right, if we followed her example and accepted her advice we would avoid mistakes and have a deep spiritual life.