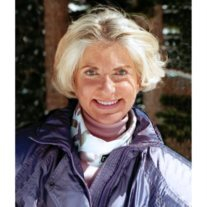 Diane “De De” Vogelsang, born June 22, 1936, went home to God on February 18, 2014, surrounded by her loving husband Peter; her children Lori, Lisa, John, and Krissy; and her sister Donna. Her grace and strength in her final days helped her loved ones transform the pain of their loss into a spiritual journey of unconditional love.

Diane was born to Evelyn and Harry Simonini on a summer day in Illinois. Her bright blue eyes melted their hearts. The family moved to southern California in 1940, her home for the remainder of her life.

She attended Immaculate Heart High School where many life-long friendships were formed. Her circle of friends expanded during college and throughout her life. These friendships filled her world with laughter, adventure, and fellowship which she treasured.

It was during high school that she first met Peter, the love of her life. Driving up the windy road to Lake Arrowhead was where the spark was first felt. Her sweetheart pinned her at Loyola University, and they married in 1959. Diane was a stewardess for Western Airlines and later worked for TWA in St. Louis while Peter attended medical school. These were lean years, but Diane’s “God helps those who help themselves” attitude prevailed.

Diane’s diversified career began with “A Tisket A Tasket” a business she started which created custom gift baskets, with NBC being a major client. From here, she moved to Natural Family Planning. As a leader and team builder, she trained nurses in the US, Africa, India, and South America.

Diane’s most gratifying career was being a positive and nurturing wife, mother, and grandmother. Her endless acts of love included planning family trips, cheering on the sidelines, and making weekly Sunday night calls to her nine grandchildren. She embraced each one’s uniqueness and encouraged them to be proud of being “a horse of another color.”

Diane lived every moment to its fullest, had no regrets, and passed this philosophy on to her family. She enjoyed watching the waves in Malibu and at the Mauna Kea and golfing in Palm Desert. Her daily errands included many bargain hunting trips to the 99 Cent Store. Her faith guided her to volunteer on many charitable boards which included serving as President of Social Service Auxiliary. She and Peter were soul mates who shared their passion for tennis, golf, Lakeside, travel, entertaining, and USC. Diane will remain forever Peter’s Princess.

Diane is survived by her loving husband Peter; their four children Lori (John), Lisa (Michael), John (Lisa), Krissy (John); her sister Donna (Ben); and 9 grandchildren and is preceded in death by son Richard.

Recitation of the Rosary 10:30 am with Funeral Mass at 11:00 am on Friday, February 28 at St. Francis de Sales Catholic Church, 13360 Valleyheart Drive in Sherman Oaks.