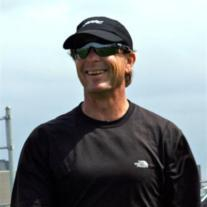 David Stubbs-Almlie, age 53, passed away on Thursday, October 27, 2011 in Huntington Beach California following a yearlong battle with cancer. He was the son of Paul and Joan Stubbs, and leaves behind his adoring wife of 15 years, Lisa, their two sons Cody (11) and Shane (8), as well as his father Paul Stubbs and sister, Traci Scinto.

Dave has been a Huntington Beach resident since the early 80’s. He was a dedicated member in the food service industry devoting twenty-eight years to the business, where he developed and maintained numerous friendships over the years that remain strong to this day. Dave also met his wife Lisa through work in 1994 and married her soon after.

Dave was a very disciplined and passionate man who did nothing in moderation; it was all or nothing. He was a loving husband, an exemplary father and devoted friend. Dave always took the time, had the right words and the best advice for all. Dave had a brilliant mind, which was filled with a lifelong love of books and knowledge.

Dave dedicated his life to martial arts. He received several degrees in black belts and inspired his students to adopt the same philosophies and passions for the art.

Dave has left behind an ever-expanding trail of people whose lives have been etched deeply by his pursuit of living life to the fullest, and always giving 100% to everything he did.

Dave will be remembered as an influential inspiration whose shining light has brightened and warmed each of our hearts and souls. He is a true warrior who has left an eternal impression on this world.

Please join us in celebrating the life of this extraordinary man.