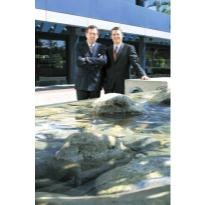 David George Sills, erstwhile presiding justice of the California Fourth District Court of Appeal passed quietly Tuesday, August 23rd, ending his life as he had lived it, cloaked in dignity and courage and surrounded by loved ones. The legal community will miss his leadership and incisive intellect, but everyone who knew him will mourn the loss of a kind and generous friend.

Born and raised in Peoria, Illinois, Dave was introduced to California as an Eagle Scout when he attended the Boy Scout Jamboree held in 1953 on property that is now Fashion Island. After completing a degree in political science at Bradley University, he obtained a law degree, excelling as a National Moot Court Finalist at the University of Illinois College of Law. After law school, Captain Sills served his country as a company commander and brigade staff officer in the Marine Corps from 1960-1965, before returning to southern California to practice law in Irvine, not far from the site of the 1953 Boy Scout Jamboree.

He was elected mayor of his adopted city in 1976 and served ten years on its city council including four terms as mayor, presiding over its transformation from a sleepy suburb to a city five times the size of the one he had moved into – a city nationally recognized for its intelligent planning and quality of life, both of which were accurate reflections of Dave s values and skills.

He was involved in every conceivable civic endeavor, his support and enthusiasm springing from an apparently bottomless well. He was the Chairman of the Irvine Health Foundation, on whose board he served 26 years. He also built a successful law practice and was appointed to the Superior Court bench by Governor Deukmejian in 1985. Five years later he was elevated to the position of Presiding Justice of Division 3 of the California Court of Appeal, a decision the voters confirmed three times.

He was born to run that court. He led naturally, easily, and by example, inspiring integrity by living it. He wrote with style and precision, and put his indelible stamp on the court system both as a jurist and an administrator.

While turning out an astounding 2, 000-plus opinions whose quality of analysis and rapier prose made him a force to be reckoned with in the development of California law – he also found ways to eliminate the backlog that had plagued the court since its inception, and he engineered its removal from charming but cramped rented quarters into is present showpiece court building on Santa Ana Blvd. and Ross. No one who knew him will ever enter that building without thinking of the man who made it possible – and remembering his ready smile and kind heart.

He is survived by his beloved wife Susan LaCroix Sills, his brother Dan, his bereft colleagues on the Court of Appeal, his Marine comrades, the citizens of Irvine, a grieving legal community, and people all over the state of California whose lives are better because of Dave Sills’ lifelong commitment to service and justice.