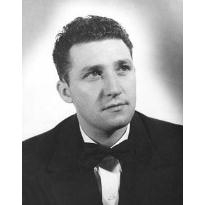 Early in the morning on Sunday, February 7, 2010, Daniel Anthony Cristofaro went to be with the Lord after nearly 88 years. Born of Joseph and Grace Cristofaro on March 12, 1922 in Cranston, Rhode Island, Danny as he was called then and later Dan was the oldest of 4 sons Pasco, Joseph and Ralph and younger than his sister by 18 months Mary. Raised during the Great Depression, Danny left school early to help support his family, and following high school, left to enlist in the Navy at the outset of World War II. Attaining the rank of Boatsman First Class on the USS Brooklyn, he was honorably discharged early after contracting Rheumatic Fever.

Dan moved out to California the first time in 1947, then returned home and again returned to California to stay in 1953. He became a plumber in the construction industry during this time, and was a plumber for 30 years prior to retirement in 1983. While attending a bowling team party, my father met his wife of 48 years, Carmella Sanza, at her cousin’s residence in 1961. Following a whirlwind romance, they were married 6 months later in Cincinnati, Ohio. They returned to California and had two children, David in 1964 and Cheryl in 1965. He also has 3 grandchildren: Michelle, 28, Briana, 14 and Danny, 11.

Dan was an avid golfer and singer, and enjoyed gardening and sports. He is missed very much by his family and friends.