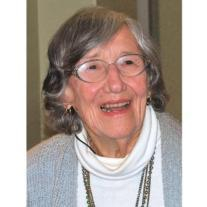 Constance Elizabeth ‘Betty’ Goetz, almost 89, died in her own bed at Atria Woodbridge in Irvine, California, March 28. She had suffered a major heart attack earlier in the month.

Betty was born June 10, 1923, in Minster, Ohio, the ninth child of Anna Hemmelgarn and Anthony Knapke. She grew up in Minster in the family home across the street from the Catholic church where her father played the organ when he wasn’t working a the school principal.

She met John Goetz through friends and carried on a long distance romance when he was sent overseas to participate in the second wave of the Normandy invasion of World War II. He was wounded and captured but survived to come home and marry Betty in 1945. Betty graduated from Minster High School and worked as a nurse in Ohio during the war.

While raising their six children they made their home first in Renssalaer, Indiana and Pittsburg, Pennsylvania before settling in Fairborn, Ohio. In 1957, they moved with John’s work to Southern California and made their longtime home on Woodward Boulevard in Pasadena.

Betty was a social and friendly person who enjoyed her role in the neighborhood as mother of her active crowd of children and their friends. Her husband John once said, ‘Betty is the one who taught me how to have fun.’

After John’s death in 1980 she continued to live in their home in Pasadena. She enjoyed and continued to play tennis past her 80th birthday. In 2009, she moved to Irvine.