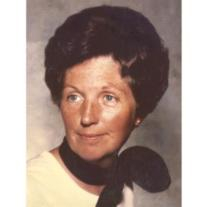 Clara was born December 12, 1930 in Brooklyn, New York to the late Leo and Mercedes Joy. She was the middle child of three; the late Leo Joy and younger brother Donald Joy. She attended Holy Name grade school and graduated from St. Joseph High School in Brooklyn, New York. After graduating from High School Clara worked for Singer Sewing Machine manufacturing in Manhattan, New York as an executive assistant. Clara always had a passion for sewing and was a skillful and professional seamstress her entire life; she also had a custom sewing and tailoring business named “Sewing by Clara”. In addition to sewing, she was a talented artist and painter.

On December 27, 1952, Clara married her Grade School sweetheart and friend Walter F. Gramberg also of Brooklyn, New York. Following their marriage Clara and “Wally” moved to El Paso, Texas where the newlyweds were stationed at Fort Bliss Military Base. In the following years Clara and Wally lived in St. Claire Shores and Harrison Township, Michigan; Brea, California and retired to Laguna Woods, California in the late 1990’s.

Clara was an active member of the Catholic Church in Michigan and California, a frequent volunteer in the local schools and an active PTA member. In addition to sewing and painting, she also loved to play bridge, dancing, camping with her family and enjoyed traveling and taking cruises with Wally in retirement. A devoted wife, mother and friend, Clara was always loving, supportive, accepted all thoughts and points of view, had a creative mind and encouraged all of her children to study art, music and play sports in addition to helping them with their studies.

Clara is survived by her husband of 60 years Walter F. Gramberg; her 5 children, Travis, Eileen, Eric, Joan and Karen; 5 grandchildren, Sarah, Travis, Sam, Veronica, Alec, and her brother Donald Joy and his wife Betty. She is also survived by many other nieces, nephews, and many friends. In addition to her parents, she was preceded in death by her older brother Leo Joy and his wife Mary.