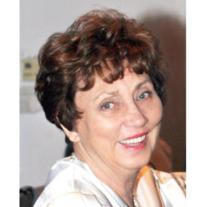 Charlyne B. Davies, of Laguna Niguel passed away March 29, 2012 after a long courageous battle with Dementia. She was a devoted wife, mother, sister, and aunt.

Charlyne was born November 11, 1934 to O. C. and Daisy Blaylock, and was elder sister to Gayle Herrin. She spent her early childhood in Houston, Texas, and later spent many summer vacations there with relatives. When she was eight years old, her parents moved to Forest Hills, New York. While living in Forest Hills, she attended PS-99 and graduated from Forest Hills High School. In 1952 her family moved to Short Hills, New Jersey.

She first met her husband-to-be, Allen E. Davies through her closest friend Gloria Natale in 1950. They had known each other for 8 years before they started seriously dating and got engaged. They were married on April 7, 1956 in Short Hills, New Jersey. Following the wedding, they resided in Hartford Connecticut before moving to Jackson Mississippi in 1958 and then to Richmond, Virginia in 1960 where she gave birth to her only child, Edward Charles Davies on February 1, 1962.

Allen’s job at Royal Globe Insurance Company took them from Virginia to Charlotte, North Carolina and Pittsburgh, Pennsylvania before coming to Los Alamitos, California in 1971. When her son reached the age of 14, she worked part time as proofer for the News Enterprise in Los Alamitos for 3 years and finished up her working career at Cleland Sales Corporation in Cypress from 1981 to 1984. She and her husband moved to Laguna Niguel in 1985 where they planned to live out the rest of their lives by going to the beach or fishing on their new boat with family and friends.

Whether friend or stranger, Charlyne greeted everyone with a warm smile and caring words. She was an outstanding cook, with southern dishes being her specialty. Charlyne became interested in politics and campaigned for Barry Goldwater and Ronald Reagan. As an avid reader, her interests ranged from the newspaper to novels to biographies. She was a big fan of Ayn Rand. She loved watching classic Paul Newman movies. She also enjoyed playing board games and Jeopardy with family and friends. Charlyne took great pride in nurturing her family; to her there was no greater blessing. Through her grace and strength, she was an inspiration to us all.

Charlyne was preceded in death by her husband Allen E. Davies, her parents O.C. and Daisy Blaylock, and her sister Gayle Herrin.

She is survived by her son Edward Davies, her daughter-in-law Susan Davies, her grandson Gabriel Davies, her nieces Sharlyne Toon and Alicia Kepler, her nephew Tim Alexander, and her grand-niece Stella Toon.

If you wish to send flowers, plase have them sent to O’Connor Mortuary, 25301 Alicia Parkway, Laguna Hills, CA 92653

4 responses to Charlyne B. Davies