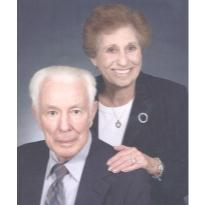 Our father, grandfather, great grandfather, and husband was born in Kingston, Ohio, on August 19, 1916. He was the third child, the first son, of what was to be a family of thirteen children. They grew up on a farm in Laurelville, Ohio, on the meandering Thompson Road where many Ohioans go in the fall to see the changing of the leaves. When Chuck was 18, his 41 year old mother died, leaving 11 children still at home, with the youngest being 3 months old. Because of growing up on a farm, there was always food on the table. They used food to barter for clothing, shoes, and other necessities for all the children. Chuck frequently shared stories about farm life and the struggles his father had as a single parent. Chuck moved to California in 1940 and went to work at Douglas Aircraft. Toni’s best friend from Venice High School, Jackie, introduced Toni to her boyfriend’s brother, Chuck. Toni and her best friend married two of the Thompson boys in 1941 and the two couples remained life-long friends. Chuck’s job at Douglas Aircraft in Santa Monica kept him from serving with the troops in World War II. He was the proud father of three daughters, Carol, Janet and Judy, and eventually the proud grandfather of seven and great-grandfather of five.  Even a few weeks before his death, the youngest members of the family were a special source of joy to this man who loved family and home and the simple pleasures in life the best.  Chuck retired from Douglas after 32 years.  Chuck and Toni traveled all around the United States several times with many visits back to his beloved home state of Ohio. They also managed to squeeze in a few trips to Europe and Hawaii. Chuck was the family handyman until he was in his eighties, fixing everything for everybody and even painting the outside of his house at the age of 83.  His children and grandchildren vividly recall his attention to their vehicles to insure that safe drive home.  He was known to be a strict follower of rules; if the speed limit was 55, you didn?t drive 56!  He had a great love for the Los Angeles Dodgers and wore his hat daily until a few weeks ago.  He loved to play poker with his whole family and enjoyed many all-night family poker parties in his younger days. Toni’s Italian father had a dream of living on Sunset Boulevard when he was a child growing up in Italy. He was able to realize his dream and built the house Toni and Chuck lived in for over 43 years before moving to Mission Viejo five years ago. Chuck was blessed with good health most of his life until his struggle with Parkinson’s. Even during some difficult times with his illness, he did not complain.   He left a legacy of honesty and fairness, hard-work and the importance of family that is carried over to those he left behind.   He lived his life without regrets.  He will be deeply missed by his family and by all those who knew him.

In lieu of flowers, the family requests donations in his memory to Michael J. Fox Foundation for Parkinson’s Research to help find the cure for Parkinson’s Disease. Please Select ‘Charities’ for details.