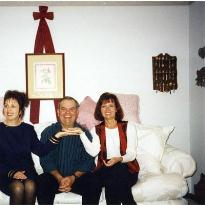 Cathy Leigh Haugen passed away at her home in Mission Viejo, CA on December 30, 2010. Cathy was born on November 12, 1956 in Northern Minnesota. She grew up on her parents’ farm in Beltrami with her brother, Bruce, and her sister, Chrys.

Cathy graduated from Fertile-Beltrami High School in 1975 and attended the University of Minnesota in Minneapolis receiving a degree in Dental Hygiene.

She married Dan Haugen, of Fertile, on October 12, 1979 and they moved to San Diego. Her son, Austin was born in San Diego on December 16, 1985. Over the course of their 32 year marriage, they lived in San Diego, Atlanta, Santa Barbara, Denver and Mission Viejo. She practiced Dental Hygiene for 18 years and retired in 1994.

Cathy was generous, good hearted, had a great sense of humor and was a lively conversationalist. She was tenacious and tireless when it came to helping others and making them feel special. Her faith and her family were the most important things in her life.

Many times she was heard saying her biggest accomplishment in her life was her son, Austin. Cathy spent many years volunteering at Austin’s schools. She was always the ‘room mom’ of the class, the team mom, the Cub Scout leader, the school auction organizer, and the organizer of many other school events.

She is survived by her husband, Dan, her son, Austin, her parents, Walter and Charlene Stromstad, her brother, Bruce Stromstad, and sister, Chrys Stromstad O’Neill.

Cathy was a beloved wife and devoted mother and will be sorely missed by all who knew her.

In lieu of flowers, memorial gifts may be made to the Susan G. Komen Foundation.