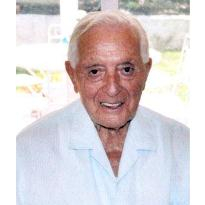 Carlo Matero passed away peacefully on December 13, 2010 at his home in Laguna Niguel, CA, surrounded by his loving daughters, Mary and Angie.

After his birth on January 22, 1917 in Pontiac, Michigan, Carlo’s family moved to Chicago, Illinois, where he spent most of his adult life. He enlisted in the Army during World War II and proudly served as a Medic, earning 2 Bronze Stars. He shared a wonderful life with his beautiful wife, Mary Surace, until her passing in 1982. In 1987, Carlo followed his daughters to Laguna Niguel, CA. He volunteered at the Sea Country Senior Center for 23 years and became Citizen of the Year of Laguna Niguel in 2003.

Carlo is survived by his two daughters, Mary Przeklasa Tim and Angie Narel Len and his 4 grandchildren, Melissa Przeklasa Auth Jonathan, Kristen Przeklasa, Kimberly Narel, David Narel and his great-granddaughter, Emma Auth. Carlo always put his family first and loved nothing more than being surrounded by his children and grandchildren.

In lieu of flowers, a donation in his name to the America Heart Association would be greatly appreciated.

3 responses to Carlo A. Matero