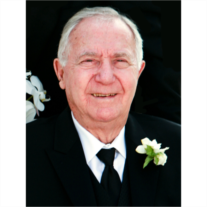 To many he was known simply as “Coach” as he touched the lives of hundreds of young men over nearly three decades as a head football coach of high school and college programs. To his family, he was a beloved husband and father who left a legacy of love and respect as the cornerstones of a life well lived.

Carl was born in Chicago, Illinois and grew up in the south side back in the days of Al Capone and the depression. Times were tough, and his parents divorced when he was nine, splitting the family apart. His mother and sister left, and little did Carl know it would be over thirty years before he saw his sister again.

Carl excelled in sports, and was a three-sport star in football, baseball and track. His father recognized that his athletic skills were Carl’s best chance at obtaining a college scholarship so he enrolled Carl in Lindblom High School, which had an excellent sports program and a coach who was known for emphasizing academics along with sports. Carl received multiple scholarships and ultimately enrolled at the University of Montana in 1942. He played one season there before transferring to Western Michigan University in Kalamazoo, but his college days were soon cut short by World War II.

In 1944 Carl enlisted in the United States Marine Corps and he soon shipped off to Camp Pendleton in California for basic training. Carl was part of the 5th Marine Division and his unit was one of the first units deployed to occupy Sasabo, Japan and secure the area following the surrender of the Japanese.

Following the war, Carl returned to WMU where he became a star football player. He set school records as a receiver and in 2005, Carl was named to WMU’s All-Century team as one of the best players between 1906-2005. He went on to a brief stint with the Baltimore Colts. More importantly, it was at WMU that he met the love of his life, Marilyn (Lyn) Maurer. The two were married in 1948 shortly after their graduation, and the two decided to start a family. Carl and Lyn moved to California in 1956, and in 1966, they relocated to Cypress, California where Carl had accepted a position as Cypress College’s first Athletic Director and Head Football Coach.

After retiring, Carl had the time to pursue his passion for travel. Over the next ten years, Carl and Lyn enjoyed their time traveling abroad, or to their favorite ‘local’ get-aways, Las Vegas and Laughlin, Nevada. Carl also liked to spend time down by the beach in San Diego where he always seemed to find a way to fit in a visit to Old Del Mar to see the ponies run.