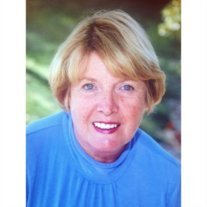 Britta Linnea Alerheim age 72 of Mission Viejo, CA passed away on January 29, 2013 from complications of cancer.

The funeral service will be held at 11:00 am February 15th at Svenska Kyrkan / Church of Sweden Los Angeles. Pernilla Hakansdotter Olsson will be officiating. We will be serving lunch and coffee after the service.

Britta was born in Sweden on February 10th 1940. She came to the US in 1964 to find adventure and opportunity. Britta was married to Lars Alerheim; they were married 48 years.

Britta worked as a Dental Technician for 30 years. She retired in 2008 and took care of her Granddaughter and Grandson after she retired. Britta enjoyed spending time with her family and friends, traveling to Sweden and she was also actively involved in SWEA.

Britta is survived by her husband Lars, daughter Mia, grandchildren Nickolas and Gabriella, brothers and sisters Hans and Ulla, and other family and friends.

Britta was a loving wife, mother and mormor who always wanted the best for her family. She will be truly missed.

In lieu of flowers memorial donations may be given to Svenska Kyrkan/ Swedish Church of Los Angeles http://www.svenskakyrkan.se/losangeles.

The family of Britta Alerheim wishes to thank everyone for their condolences.