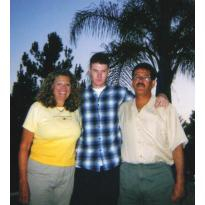 Brendan was born April 7, 1984 in Turnersville, New Jersey. He had an older brother, Devin Niemic, who passed away in June, 2006; and a younger sister Lauren Niemic who attends college and works here in Orange County. He was always big for his age and looked older than he was. He was always excited over food, loved cooking and was passionate about food his whole life. Brendan spent his early years in New Jersey and enjoyed spending summers in the Jersey Shore resort city of Ocean City, NJ. He was a good swimmer and loved to boogie board in the high surf. He even learned to scuba from his uncle Denny, a professional diver. He loved the winter and the snow.

Brendan moved to Mission Viejo, California in the summer of 1993 at 9 years old when his dad was transferred to Tustin. He attended Monte Video Elementary and then Trabuco High School. While at Trabuco he played football as both an offensive and defensive lineman. Here his great size helped him earn the nickname of the ‘tree’, because when you ran into him it was like hitting a tree.

He did not want to pursue college, enjoying working more with his hands instead. He loved snow boarding in the California mountains and became skilled at it. He was good at building things and dabbled in construction for a period of time. When he turned 18 he received a substantial amount of money from an auto accident trust. He decided to use the money frivolously, fell in with the wrong people, and, like so many young people, developed a drug addiction problem.

Brendan was in three different re-hab centers over a 3 year period, falling off the wagon again and again. Finally he entered Cornerstone in Tustin, CA where he really accepted his problem and worked to release himself from his addiction. He left Cornerstone after months of training, working and proving to himself, his family and friends that he was clean and sober. He worked in a popular sandwich shop and became the shift manager. He then worked at a large chemical company driving forklifts and mastered a complex chemical mixing procedure.

Brendan remained addiction free, did not drink and attended AA meetings. In December he would have picked up his 4 year chip awarded for 4 years of sobriety. Often his size would intimidate people, he was 6’8′ and 380 pounds and had lots of tattoos. Truth is he was a gentle giant, avoided confrontation and had a huge, giving heart, sharing everything with his friends. He always wanted to move to Alaska or Montana and live in the cold, snowy, mountain air, finding the heat of California just too much. In the past year he had studied paranormal science and involved himself with a group of well respected professionals of national recognition. It was a new passion which he embraced and loved. He lived with his parents and sister in Mission Viejo till he died on November 28, 2008. ‘Ar dheis DÃ¨ go raibh a anam’