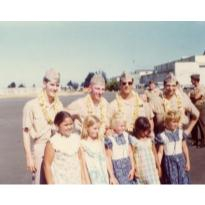 Bradley S. Clark was born January 30, 1953 in Bethesda, Maryland and went home to be with Jesus on April 8, 2010. He was graduated from the United States Naval Academy in 1976 and served his country honorably as a Marine. Later he went to work in the private sector where he continued working in the defense of his country as the Vice President of Programs for General Atomics Aeronautical Systems. Brad is survived by his high school sweetheart and wife of 34 years, Cheri, his two daughters, Rebecca Guerrero and Natalie Winter, his sons-in-law Ted Guerrero Jr. and Aldee Winter, and his 2 granddaughters, Riley & Declynn Guerrero. Brad loved Christ, his family, and softball.

A memorial service in Brad s honor will be held on Saturday, April 17th from 11AM-1PM at Compass Bible Church 140 Columbia, Aliso Viejo with a reception immediately following. In lieu of flowers, the family has requested that donations be made to the SVCS – Ellzey Scholarship for Christian Character 26333 Oso Rd, San Juan Capistrano, CA 92675-1630.