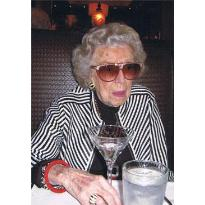 Born October 30th, 1916 in Cincinnati, Ohio, ‘Liz’, as she was known to her friends, was adopted by Arthur and Bessie Ewald.  Raised in Cincinnati, Liz had several hobbies, namely golf and photography.  Her father introduced her to photography, and she enjoyed it.

Married in 1940 to John C. McLean, they had one child, Roger S. McLean.  They divorced in 1942.  Liz married John Phelan and soon after moved to CA where John worked for Allstate Insurance.  And, Liz opened her own detective agency, one of the first women to do so at the time.

She and John lived in Altadena, CA, moving eventually to Laguna Beach.  They had one child, Roxanne Phelan.  They lived around the Laguna area the rest of their lives.

Liz worked for Ethan Allen Galleries in Laguna for several years.  Later in life, after retiring, she went back to work for the City, in the security service, as she like that kind of work.

Liz was preceded in death by her parents, ex-husband John Phelan, and daughter Roxie.

A memorial service will be held March 12.