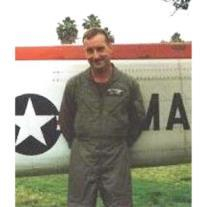 Benny Pisarski II was born the 2nd day of September 1956 to Elizabeth and Benny Pisarski Sr. in Toledo, Ohio. After high school, he attended Owens Technical College in Oregon, Ohio in 1975.

In 1987, Benny (Ski) became a Crew Chief for the Search and Rescue Helicopter Unit at MCAS El Toro. During his time at El Toro SAR, he was considered a true professional. He was admired and respected by everyone who came in contact with him. He was known for his wit & his ability to make people laugh while always remaining respectful. GySgt Pisarski was credited with successfully completing 96 search and rescue missions throughout southern California. Ben spent his last tour in the active reserves and retired at the rank of Gunnery Sergeant from the Marine Corps in January 2001.

Our beloved Benny passed away in Rancho Santa Margarita, CA on the 25th day of January 2015. He is survived by his soul-mate of 22 years, Mary Redwine, his brother Donnie, his son Wesley, his granddaughters Madalyn & Madison, and his niece and nephew Mike & Dawn.