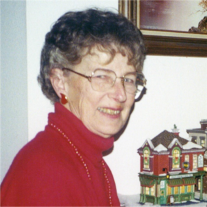 Barbara was born Jan. 4, 1933, in Grand Rapids, Mich., the oldest of two children of Clarence and Kathryn Wanderscheid. Promoted an extra grade in grammar school, she attended high school at Marywood Academy and was a top student. In 1954, she graduated from Michigan State University, and like her mother and her younger sister, Mary Ellen, she became an elementary school teacher.

In 1958, she decided to escape the frigid Midwest winters and moved out to San Francisco. Over the next several years, she taught in San Leandro, enjoyed a summer in Hawaii, and joined the Catholic Alumni Club, where she met and fell in love with Homer Sweeney, Jr. She and Homer were married Aug. 6, 1966.

In 1969, they moved to Fremont, where they spent the next 28 years. Barbara continued to teach, often as a substitute teacher at Holy Spirit School in Fremont. Mostly, though, she devoted her time to raising their two daughters, Jane and Katie-doing emergency sewing “surgery” on teddy bears, enforcing strict bedtimes, making peanut butter and jelly sandwiches, expertly removing stains with Spray ‘n Wash, chaperoning field trips, attending every single one of her daughters’ countless volleyball and basketball games, and so much more.

Barbara and Homer moved to Irvine in 1997, and over the past 19 years Barbara enjoyed living in close proximity to her daughters and watching her granddaughters Danielle and Emily grow up. She also enjoyed numerous trips with Homer to such locales as Arizona, Hawaii, New England, Canada, Seattle, Colorado, the Midwest, Georgia, South Carolina, San Francisco, Las Vegas and Lake Tahoe. She was an active parishioner at St. John Neumann’s Catholic Church, where she faithfully attended 7 a.m. Mass every Sunday.

She especially looked forward to birthdays and holidays, and she could not wait for people to open their gifts. (She also couldn’t wait to open her own gifts and was notorious for ruthlessly ripping off wrapping paper.) Most of all, she enjoyed just spending time with family and friends.

One of the final highlights of her life was when she and Homer celebrated their 50th wedding anniversary Aug. 6, 2016, with friends and family at the United Irish Cultural Center in San Francisco.

Memorial donations may be made to the COPD Foundation (copdfoundation.org), which supports research and programs to help prevent, cure and treat COPD (chronic obstructive pulmonary disease).

A reception to remember Barbara and celebrate her life will be held at the home of Homer Sweeney on Wed. Oct. 12 at 12:30 p.m., following the Funeral Mass of Christian Burial.