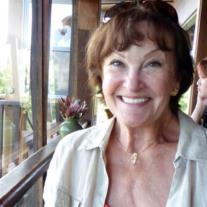 Barbara Pettee Mosten was born on October 2, 1951 in Los Angeles, California. She passed away at Hoag hospital in Newport Beach, California after suffering a Subarachnoid hemorrhage on November 20, 2014 at the age of 63.

“Barb” as she was fondly known by friends and family, grew up in Los Angeles where she was raised primarily by her grandmother after losing her mother during childbirth. She attended a private school in Beverly Hills and Palos Verdes High School before graduating from Riverside Community College where she earned an Associate Degree. A Registered Nurse for 27 years, she worked in many settings at Riverside Community Hospital including critical care and the OR, and in 2005, at Corona Regional Hospital, she was named Nurse of the Year.

“Barb” loved life. She met the love of her life and her partner on her birthday in 1980 and they were married in December of 1981. They loved traveling together and frequented the Hawaiian Islands where she enjoyed immersing herself in Hawaiian culture including music, Hula, and lei-making. She enjoyed all their travels, and they most recently traveled to Italy.

Her faith was an important, integral part of her life. She was very actively involved in parish ministries at both her first parish, St. Matthew’s in Corona, California, and at St. John Neumann, in Irvine. She and Randy felt blessed to help facilitate the marriage preparation class, always saying they received so much more than they gave.

A vigil will take place at O’Connor Mortuary in Laguna Niguel, California on Friday, November 28, 2014 at 7:00 p.m. Funeral Mass will be held Saturday, November 29, 2014 at 10 a.m. at St. John Neumann in Irvine, California. Interment will follow at Ascension Cemetery in Lake Forest, California.