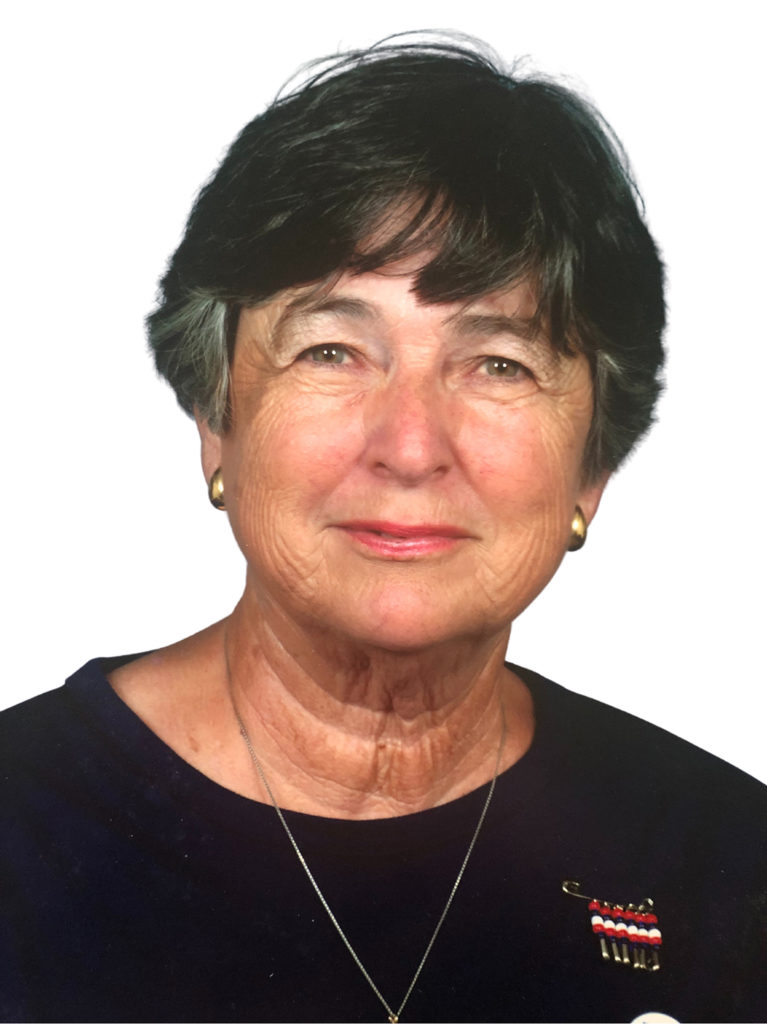 Barbara Jane Brophy Krogius, 87, passed away peacefully on January 23, 2022, just 24 days after the passing of her beloved husband of 69 years, Tristan (Tris) Krogius.  She was born in New Rochelle, New York to her father, William Edward Brophy, a chemical corporation executive and her mother, Dorothy (nee Johnson), a Daughter of the American Revolution.   Barbara was the youngest of four children.  After graduating from the Ursuline School in New Rochelle in 1951, she desired to go west for college.  Her father limited her choices to two locations where she had relatives:  Albuquerque and Austin.  She chose the University of New Mexico.  After a few weeks at UNM, Barbara was introduced at a fraternity party to Tris, a sophomore NROTC scholarship midshipman from Brooklyn Heights, New York, and they became inseparable.   Not surprisingly, the couple was denied permission to marry by both families.  At home in New Rochelle, her parents decided the best solution was for Barbara, 17, to attend college in Europe.  Defying their parents’ wishes, the couple eloped on August 29, 1952 right before Tris, 19, was due to report back to UNM.  Both families eventually reconciled to the marriage.  In the early years of their marriage, Barbara worked as a bank teller.  Tris finished college after which he was commissioned a second lieutenant in the USMC.

The next six years found the couple living in Quantico, Virginia, Camp Pendleton, California, Fort Sill, Oklahoma, Kenitra and Bouknadel, Morocco and, finally, Camp Lejeune, North Carolina, during which three children were born, Ferril, Tony and Karin.  Tris then resigned his commission in 1960 and the family moved to Los Angeles where Tris began his corporate career in sales for Scott Paper Company.  During this time Barbara bore three more children, Eric, Mimi and Becky.

A succession of moves followed as Tris changed jobs and climbed the corporate ladder.  Scott Paper transferred Tris to the home office in Philadelphia.  But, drawn to California, a marketing position with Norton Simon’s Hunt Wesson Foods, Fullerton ensued and the family took up residence in the new Laguna Niguel development.  They then moved to Oakville, Ontario when Tris was promoted to president of the Hunt-Wesson Canadian division.  In 1970, while still in Canada, they designed and started construction of their family home in Monarch Bay Terrace in anticipation of returning to California.  This came to pass as Tris was made president of the H-W Frozen & Refrigerated Foods Division.  Two more career positions followed requiring the purchase of second homes in Carmel and, then, Bakersfield to enable the couple to commute during the week until Tris’s eventual retirement as CEO of Tenneco West, Inc.

Barbara was active in community affairs including the new Dana Hills High School and St. Catherine’s School.  The couple were leaders in raising funds to preserve St. Catherine’s School.  Barbara headed the women’s Hill & Harbor tennis league and was a founder of The Revelers, an organization of South Coast residents supporting the O.C. Child Guidance Clinic.  Meanwhile, Tris served as a board member and president of the South Coast Community Hospital, which involved Barbara as well.  With several good friends, Barbara and Tris bought a condominium in Mammoth enabling the children to become accomplished skiers.  Countless weekends were spent at home with the whole family and driving to Junior Tennis tournaments where the children competed.  Barbara’s activities multiplied as the children all finished college and married.  As her children and their spouses pursued careers, “Grandma Barbara’s Child Care Center” was formed to accommodate the working moms.  All of the grandchildren were brought as early as 6 a.m. to Grandma’s and they would be fed, entertained and taken to school or afterschool activities by Grandma or one of her two live-in helpers.  At one point there were as many as 11 children at Grandma’s house with four babies napping in cribs.

When the grandchildren no longer needed day care, Barbara seized on a new opportunity to evade the “empty nest” syndrome.  She spent six years as a full-time volunteer teacher’s aide for the kindergarten and first grade at St. Catherine’s.  In the ensuing years, the Krogius California Clan, which numbered 33 (12 children and spouses, 19 grandchildren, grandma and granddaddy) enjoyed numerous trips including a sleeper train to Santa Fe, cruises to Mexico and Alaska, vacations in Montecito and Carmel and a fabulous visit to Tris’s native Finland where most of his relatives resided.  While Tris’s career had frequently involved him and Barbara in the political arena, with the new millennium they both became immersed in it.  Tris worked full time for three years as a leader in the successful fight to stop the El Toro Marine Air Station from being converted to a commercial airport.  With daughter Mimi’s decision to run for the State Assembly, Barbara spent long days of stuffing envelopes.  In the latter years Barbara had some 15 straight years as a successful video poker player at the local Pala Indian Resort & Casino winning every year and (almost) covering Tris’s corresponding losses.

Barbara was devoted to her husband and was the consummate corporate wife.  Besides hosting business dinners and events for Tris, she would make copious notes afterwards of everyone she met, their interests, children’s names, etc., and would review before meeting them again.  She was always there for her children, whether sewing a costume for a school play on a day’s notice, getting up early to help her sons with their paper routes during the frigid Oakville winter months or establishing our Christmas Eve family tradition.  She enabled her grandchildren to grow up together and taught them the importance of taking care of family.  Barbara and Tris were rarely apart, especially once Tris retired, so it was not surprising that she joins him not long after his passing.

Barbara is survived by her six children:  Ferril Onyett (Jack); Tony (Stephanie); Karin Krogius (Scott Mason); Eric (Kathleen), Mimi Walters (David); and Becky Radusovsky (Steve), 19 grandchildren and four great-grandchildren.  Her entire extended family loved and respected her and are so blessed to have had her love and devotion.  We are especially grateful to Jenny and Hannah who took extraordinary care of Barbara for the past 15 months.  We love you Mom and Grandma and take peace that you are in heaven with the love of your life.  We will miss you terribly and you are always in our hearts.

The family is hosting a Celebration of Life at 2:00 p.m. this Saturday, January 29th, at El Niguel Country Club to honor both Barbara and Tris.  There will be a funeral mass at 10:00 a.m. on Monday, January 31st at St. Catherine’s Church, Laguna Beach.