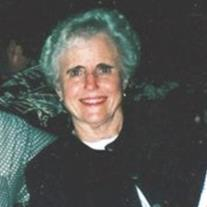 Barbara was a flight attendant with United Airlines when she met and married her husband, Paul L Lachance, on June 8, 1957, in San Bernardino, Calif., and raised five children in Huntington Beach, Calif.

Retired from UCI after 25 years with the School of Humanities. A member of the Orange County Chapter of United Airlines Clipped Wings Association.

Preceded in death by her husband Paul Lachance and her son Steven J Lachance. Survived by her four children, seven grandchildren and one great grandchild.