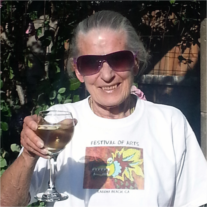 Barbara passed away on June 25, 2017. Barbara is survived by her son Lance Goulette and her three grandchildren: Mitchell L. and Kevin L. Goulette and Monica L. Goulette. Barbara was born October 27, 1933 in Long Beach, CA to the late Betty Anderson (Horsch) and Mack Anderson. She was raised in San Diego, CA, attending Rosary High School and graduating from San Diego State University before receiving her teaching credential. She then embarked upon her working life as a devoted educator, teaching for almost thirty years at the primary grade levels throughout the Saddleback Valley Unified School District. Her focus was teaching Special Education classes for special needs students and she took tremendous pride in her efforts to help get those students back in mainstream classroom programs.

After she retired from her teaching career, Barbara began a 20 plus year commitment in the volunteer arena. She spent several years volunteering as an aide in Mrs. Roberta Goodman’s second grade class at El Morro School in Laguna Beach. She also volunteered at the Laguna Beach Susi Q senior center calling out the weekly bingo game numbers and working in the kitchen.

Never one to idly sit by, Barbara was always looking forward to her next activity, and started each day waiting for the morning paper to arrive so she could get busy solving the daily Sudoku number puzzle, the Jumble scrambled word game and the crossword puzzle.

Throughout her life Barbara was an independent spirit. In the early 1960’s she was divorced from her husband and moved with her young son to Laguna Beach. Barbara always had an open door for Lance’s friends and she was appreciated and cared about by many of them. Through her last days, many of them stopped by and visited with her, helping her out when they could.

Barbara’s independent spirit could also be seen through her travel logs and pictures. She fearlessly traveled the world, sometimes alone. Her recent trips included a five day whale watching trip to San Ignacio Lagoon in Baja California and, before that, a three week safari to Africa, both trips she had dreamed of for years and was so grateful to finally take. Trips to Mexico and Belize were also regular occurrences. In addition to her fifty plus years as a resident of Laguna Beach, Barbara lived part-time in Homer, Alaska for many years.

Barbara had a gift for friendship and maintained treasured relationships throughout her life. Her friendships were all very dear to her and she had many close friends. Friends were cultivated from fellow teachers, travelers, neighbors and her circle of volunteers. She often conversed with complete strangers and ended up establishing lasting friendships.

A Memorial Service will be celebrated Saturday, July 15, 2017 at 1:00 P.M. at O’Connor Mortuary, 25301 Alicia Parkway, Laguna Hills, CA 92653 with a reception to follow. www.oconnormortuary.com. In lieu of flowers, please make a contribution to the charity of your choice.