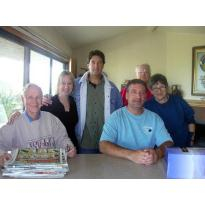 Antone James ‘Tony’ Testa was born on October 14th, 1926 in Hillsborough, Illinois. His family moved to California In 1937 settling down in Montebello, California. Tony graduated Montebello High School in 1944 where he promptly joined the U.S.Navy. Sent to Texas, Tony attended Texas University in Georgetown, as part of the V-5 program. It was at the height of the war and Tony was going into the V5 program to become a Naval Aviator, but before he could get into flight training the war ended and the Navy sent Tony home.

Once back in L.A., Tony attended UCLA and earned a Bachelors degree in business. Soon though the draft would be back so he re-enlisted in the Navy and this time he got to fly. In 1951 while attending flight training in Pensacola, Florida he met the love of his life on a blind date, Josephine F. Forrest. They would be married by Sept. 1952. Tony would have a total of 20 years in the U.S.Navy by the time of his honorable discharge, attaining the rank of Lt. Commander. The Navy would send them all over, flying Martin PBM and P5M flying boats out of Panama VP-45, helicopters in Key West and San Francisco, flight instructing in Pensacola.

The big chance came in 1956 when he got hired by United Airlines which resulted in a 30 year career. He flew several aircraft for United such as the DC-6, DC-7, Caravel, 727, 737, and finally retiring on the DC-8. Between the airlines and the Navy, Tony and his family were kept on the move; Sunnyvale, Key West, Pensacola and finally settling down in the North West suburbs of Chicago in 1963. Officially retired from the Navy in 1965, he remained in Chicago until 1977 when he got the okay from the Airline to transfer to Southern California. Without hesitation and before the next winter hit or airline changed its mind, he moved his family to Dana Point, California and remained there until his death.

Aviation was more than a career for him, it was a passion that he carried throughout his entire life. It coursed through his veins. He was a walking encyclopedia about aircraft, often knowing such small details as how certain components were made or how their design originally came about. If he was working in the yard or garage and he heard a plane fly over he would drop what he was doing to see what type of plane it was. That is how much he loved flying and how much he missed it after retiring. On his last flight for United Airlines he flew from LAX to Hawaii, celebrated his 60th birthday and was officially to old to be allowed to fly it back home according to the FAA. He rode home as a passenger officially retired after 30 perfect years.

Outside of work, Tony and the love of his life Josephine would travel all over the world. They visited such places as Kenya, Tanzania, Europe, Brazil, Australia, Alaska, Hawaii, Mexico, and various Caribbean Islands. He made many friends around the world and kept those friendships to the end. He belonged to many organizations, Experimental Aircraft Assoc., Assoc. of Naval Aviators, and the Retired United Pilots Assoc. to name a few.

On January 29th, 2011, Tony took his last flight to be with our Lord after a lengthy illness. He will be missed by all who loved and knew him.

Instead of flowers, please make a donation to a worthy charity of your choice. The Testa family would like to suggest either St. Judes Childrens Hospital or the Shriners.