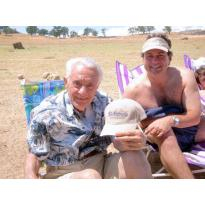 Anthony ‘Tony’ Mastrangelo was born in a small Italian town in Southern Italy, on May 21, 1925. He made his transition on December 24, 2010, after a valiant battle with pancreatic cancer. Tony passed in his beloved home in the San Clemente hills, surrounded by abounding love.

Tony was a craftsman, an inventor, a gourmet Italian cook, and an exquisite gardener. He loved nature and fresh air and respected the earth’s creatures. Additionally, he was a talented Bocce player and was instrumental in starting an informal league in San Clemente and surrounding areas. He loved music and played in a band in his youth.

Tony, also called ‘Poopie’ affectionately by his grandchildren and others, enjoyed every sunset San Clemente had to offer. He was proud to be an Italian/American and loved both cultures and never stopped appreciating the many wonders of both.

A beautiful service was also held in his hometown of Sant Arsenio, Italy, on the evening of Dec. 27th. The church was filled and the singing rung through to the Heavens, certainly entertaining Tony and deeply touching his heart. His sister, Rosetta, and his niece and nephew, planned the soulful event.

Tony is survived by his wife Angela, and his three children, Linda, Jo Anne and Anthony. He will also be missed by Randy, Juliet and Wendy, and his five grandchildren, Skylar, Matthew, Adam, Blake and Sophia.

Finally, Tony has left behind many loyal friends and relatives, who he will miss sharing that little cup of espresso with…another of his specialties!

Tony was a ‘fix it’ man, and the family is sure he is fixing the squeak in the Pearly Gates, or possibly building the mansion he promised to create to receive his loved ones one day. One of the last words from Tony’s mouth was to ask a family member for a ‘pair of pliers.’ We were not sure what he needed them for, but apparently he had already begun construction somewhere on something.

In lieu of flowers, donations may be sent to Our Lady of Fatima Catholic Church in San Clemente, The Smile Train, Humane Society of the United States or Make a Wish Foundation.